Do you want to know the real reason I haven’t been writing as many blog posts recently?  It is definitely not because I have been extra busy in the last month.

Well, here it is, my confession to you. I’ve become addicted to the TV show LOST. I know, I know, it first came out in 2004 and the series ended in 2010 or something, but I never watched it back then. 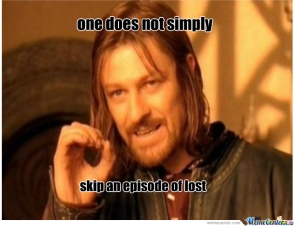 Who would argue with that?

I’ve decided that the economic recession can be traced back to the rise of Netflix – it makes it far to easy to access and watch movies, shows, documentaries…you name it. One hour easily turns into an afternoon, a day, a weekend, a week, a month without you even realizing it. The worst part with the TV shows is that you don’t even have to put in the effort to change it to the next episode, it just goes right too it. Productivity and innovation go down, so income goes down, so spending goes down, so those who don’t have Netflix have no one to sell too.

Netflix is just like that friend – we all have one – who brings you a second beer just before you finish your first, even though you told him explicitly that you were only having one. In fact, that was the only condition under which you agreed to come out during a week night. But now, it’s just sitting there in front of you. How can you say no? 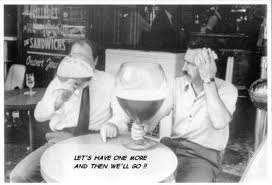 In any case, now that I have solved the economic recession, I will say that LOST is a ridiculously captivating show and the intricacy of the plot is incredible. I find that the best TV shows, the ones that are especially addicting and well thought out, start to become a reference point in your everyday life. In other words, you go crazy.

“Oh yea, I heard someone won Mega-millions, just like Hurley did before he crashed on the Island.”

“It’s so weird how [insert random friend] has been doing a John Locke, he’s always disappearing and doing things without telling anyone.”

“I love Charlie and Clair’s relationship, I think it’s so realistic with all the ups and downs, I want one just like that.”

“Arrg, my boss reminds me of Jack, he’s so controlling and makes decisions without asking us for our opinion.”

“So, who do you think is the Sawyer of our group of friends?”

Etc, and so on…I know it’s pathetic isn’t it?

Come on you know you’ve done it!

In my defense, the weather has been absolutely dreadful throughout March and I really just didn’t have anything fun or interesting to write about. It was my dog days of winter, incredibly dreadful (I can see your eyes rolling as you say, “oh here he goes about the weather again…get over it”).

Well, since April’s come the weather has improved slightly and the longer days (daylight savings was March 30th over here) provide me with more time to be outside. Also, since Lent’s over, I am drinking more coffee, which should be self explanatory. In case it’s not, it means that I have been peeing more, but I also attribute it to my renewed energy and zeal for watching LOST!

Anyway, since it was a nice day today, I decided to take a walk around the island to explore, like Sayid would (LOST reference in case you don’t know Sayid…gosh!). By that of course, I meant, I decided to go on a nice long bike ride to explore Yorkshire.

I took the train down to Leeds and started my journey just outside the city center. The main part of my journey was along the Towpath of the Leeds to Liverpool Canal. According the valued source Wikipedia:

“The Leeds and Liverpool Canal is a canal in Northern England, linking the cities of Leeds and Liverpool. Over a distance of 127 miles (204 km), it crosses the Pennines, and includes 91 locks on the main line. It has several small branches, and in the early 21st century a new link was constructed into the Liverpool docks system.”

For the most part it was really lovely. The canal meanders through mixed landscapes and scenery; sometimes leaving you in peaceful seclusion in the English countryside, with no soul in site; sometimes inviting you through pleasant towns and houseboat communities, bustling with activity; and at its worst, dragging you through some less scenic industrial areas.

The historic Saltaire Mill is located directly on the canals, but unfortunately I failed to get any good pictures of it. Though I have stolen one that you can see here: 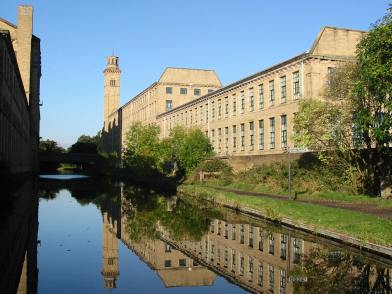 Another point of interest is the Five Rise Locks (not to be confused with Locke from LOST) located in Bingley. A canal lock is essentially an elevator for boats. While there are numerous Locks along the route, this one was by far the most impressive, and on top of that, I got to see it in use! I snapped a number of pictures with my super duper trusty 2  megapixel cellphone camera, most of which you can see in the slideshow at the end, but here is a little preview: 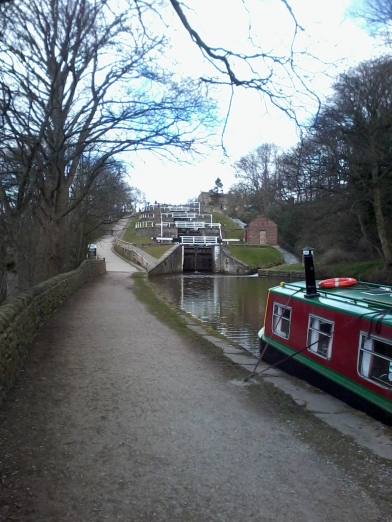 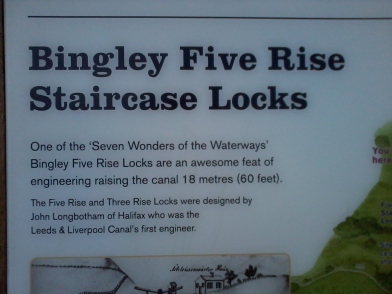 I followed the canal for over 20 miles over mixed terrain. Some of it was nicely tarmacked and smooth, but the further I got from the cities, the less maintained it became. At one point, I was essentially off-roading on a muddy footpath, but that’s only because I wanted to stay along the canal and not follow the sign with a bike on it that pointed toward the nearby road. Way to badass to follow signs!

The best part about following the canal is that the route is quite flat. The only hills come when you pass the various Locks along the way, but they are steep and sudden and don’t wear you out.

I did eventually have to get back on the road as I had to circle back toward home. This part of the route brought me over what I believe to be Rombalds Moor (a Moor is essentially a big, long, flat hill with low undergrowth), from the Aire River Valley, to the Wharfe River Valley. The first segment of this leg of the journey was painfully slow as it was a long incline into the wind. After much huffing and puffing I made it to the top and began my descent…after taking a few pics for you, of course (the best excuse for a break).

I decided to take a quick detour out to Bolton Abbey tea shops for some tea and cakes. The quick detour was about 6 extra miles, which my legs told me was unnecessary, but stomachs insatiable need for cakes spurred me on.

For the record, I did not enjoy my cake and my coffee was far too small. My legs were right.

Since I did the detour to Bolton Abbey, I justified stopping in Ilkley and taking the train back home to Guiseley for the final leg (about 7 miles) of the trip. Weak and tired me was easily persuaded that this was the best course of action.

FYI, I never actually got lost during this lovely trip – said every guy ever

All in all, I think I put in about 35 miles of Yorkshire ground behind me. It was quite enjoyable and I would definitely do the route again…maybe next time the other way, just to mix it up. I was fascinated by the canal and it’s locks. I often marvel at the incredible feats of engineering that were accomplished before the development of modern machinery.

Here are my shots from the day:

Fortunately, the title for this post is not relevant to the recent football results. After the rough patch that we hit throughout February and early May, we have managed to balance the ship. We have recorded 5 wins and 1 tie in the last 6 games. We sit comfortably in 2nd place and are slowly building up momentum for the playoffs, where we hope to earn promotion to the league above. I’ll post more footballing details soon!

Personally, I’m still working hard, but still have not had very much playing time. I am frustrated, of course, as every player wants to play. However, I am confident that it is not down to my effort or ability.

I will do my best to reignite my lost love affair with this dear blog in the coming weeks.

Until then, go head first!

PS: This post is dedicated to three of my brothers who celebrate a birthday this month. Finn, Ronan, and my Godson Aodhan. All of them are great brothers and I am never lost when I get to hang out with them!